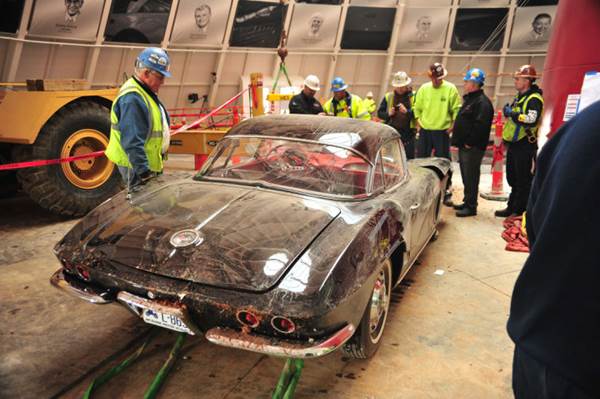 You are here: Home / Corvette News / 1962 Corvette Extracted from Sinkhole

1962 Corvette Extracted from Sinkhole
The crew responsible for extracting all of the historic American performance cars from the sinkhole under the National Corvette Museum was hard at work today – this time removing the black 1962 Chevrolet Corvette which was perched precariously along the side of the hole in the Earth with a 10,000lb slab of concrete pressed against the front end.
The 1962 Chevrolet Corvette was the most difficult car to remove as the first step of the extraction process. After spending day 1 removing the 2009 Blue Devil and the Ruby Red 40th Anniversary Edition 1993 Corvette – both of which were as simple as lifting them out of the hole – day 2 saw a much greater challenge. 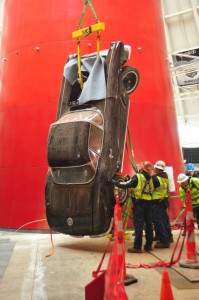 The 1962 Corvette didn’t fall nearly as far as the other 7 Corvettes in the massive sinkhole, but when it fell a large portion of the Skydome floor ended up pressed against the front end of the classic Vette. Also, the 1962 Corvette was part of a “lift display” under the 1993 Ruby Red Corvette and that lift also fell into the hole. The team was concerned that if they simply pulled the 1962 Corvette away from the 5 ton concrete slab, the sheet of manmade rock could shift and either cause more damage to the 1962 Corvette or it could fall into the hole and cause extensive damage to one of the other 5 cars still buried below. Because of those concerns, the team had to devise a plan to secure that concrete slab before moving the 62 Corvette. In addition to the headache of dealing with the concrete slab, the type of wheels and the angle at which the 62 Corvette was propped made it impossible for the extraction crew to lift this Corvette by the wheels like they did with the first two cars that came out of the hole yesterday.

Once the team had drilled a hole through the concrete slab and secured it – as well as removing the crumpled lift – they were able to remove the hood and run lifting cables around the front portion of the chassis which holds the engine in place. Thick strips were wrapped around the engine mounts and the radiator support, then attaching crane cables to those straps so that the 1962 Corvette coule be lifted out nose first. Once up and out of the hole, the black 62 Corvette was carefully set on all four wheels. While it did not start and drive away like the 2009 Corvette, the team was able to push it easily out of the opening in the side of the Skydome. 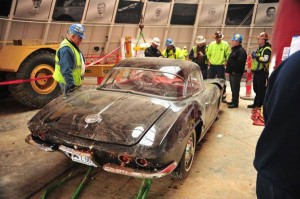 “The recovery of the first three cars went flawlessly, and the cars are in remarkably good shape,” said John Spencer, manufacturing integration manager for Corvette. Spencer. “Unfortunately, the remaining five cars are either partially or totally covered in debris. We expect their recovery will be much more challenging, and the cars to be in much worse condition.”