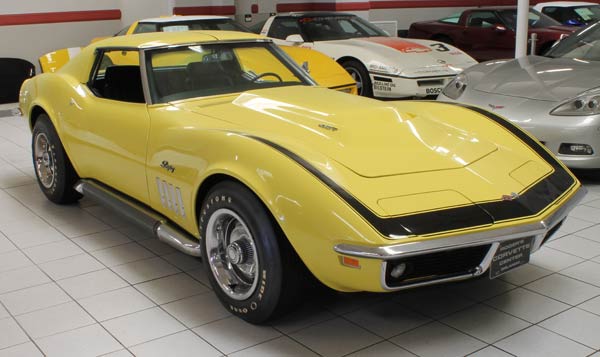 You are here: Home / Featured Corvettes / The Most Collectible Corvette in History

The Most Collectible Corvette in History

The Most Collectible Corvette in History

1969 ZL-1 Corvette: The Story of One of The Rarest Corvettes Ever Produced!

Yes, we did manage to locate the Holy Grail of all Corvettes. The mythical 1969 ZL-1! Chevrolet built just two of these cars that year. What is a ZL-1? It was an option that consisted merely of an aluminum engine block. That engine block was of the L-88 variety: the vaunted 427. In factory stock form, the engine generated well over 500 horsepower at 7,000 rpm. Not to mention a big weight savings over the cast iron L-88s.

The next best thing to owning a one-of-a-kind Corvette is owning a two-of-a-kind Corvette. The ZL-1 option package was almost as though GM made a last grand stand salute to the big-blocks before the emission controlled economy cars took over the highways of the 1970s. Mandatory with the L88 special Turbo Jet 427 package was the F41 special purpose suspension, a heavy duty transmission, Posi-traction rear end, transistorized ignition, and a heavy duty braking system. The ZL-1 option consisted merely of an aluminum cylinder block. The combined package added $4100 to the price of the car at the time. The L88 package was a $1100 option and the special ZL-1 aluminum cylinder and case cost an additional $3000, making this combination a big, big ticket in 1969. Only two Corvettes had been factory assembled with this ZL-1 aluminum engine option. That alone is enough to thrill a Corvette owner, but this car’s history turned out to be truly unique.

This car was originally ordered as a company car, by the Corvette plant resident engineer in St. Louis– George H. Heberling. His rationale in ordering it was that such a production vehicle would benefit from an evaluation in actual use by one of the plant’s personnel. The car was ordered with all available options, resulting in a sticker price of $10,771.

The all-aluminum 427 option shaved about 100 pounds off the engine, resulting in improved performance. When a previous owner (Wayne Walker of Zip Products) had the motor dyno tested, it produced 523 horsepower at 7,000 rpm, with all stock Chevrolet parts. According to Karl Ludvigsen’s “Corvette: America’s Star Spangled Sports Car”, the cast iron L88 427s produced over 550 horsepower. That’s a lot of power to be running on the street, but the street is just where George Heberling drove the car for its first 1200–2000 miles. Then he was transferred from St. Louis and left the ZL-1 behind. His successor was not so taken by the big horsepower Corvette, and it was put up for sale through GM at the zone level. 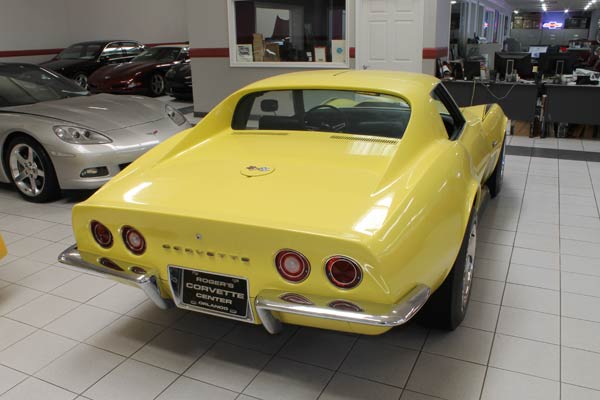 The car eventually found its way to Hechler’s Chevrolet in Richmond, VA, possibly because Hechler’s had become a volume dealer, specializing in high performance cars. The Corvette sat on Hechler’s floor next to a ZL-1 Camaro (of which 69 were factory produced), and it sat there quite a while– from November 1969 to January 1970– likely because of the $10,773.65 price tag.

John Zagos, a high school buddy of Wayne Walker’s, eventually bought the car for $5000 (he also had to throw in a used 1967 Corvette convertible). John was primarily into drag boat racing and he bought the car so he could put the engine into one of his boats. But the night he bought the car, he literally ran the stuffing out of it (he later reported it was so powerful it could melt the tires at will and was the fastest vehicle he had ever driven). That night, John dropped a valve resulting in a big explosion and a massive engine failure. Amazingly, an engineer from the Tonawanda engine plant reviewed the situation and after a thorough inspection, concluded that the failure was covered under warranty and authorized an engine replacement. When Zagos finally got the new motor, he put it in one of his drag boats. The car sat idle for a couple of years with a $3000 price tag, because there was little interest in a car for that amount without an engine. Eventually, John put a 454 cubic-inch passenger car engine in the Corvette and sold it back to the dealer. From there it went through a succession of owners. 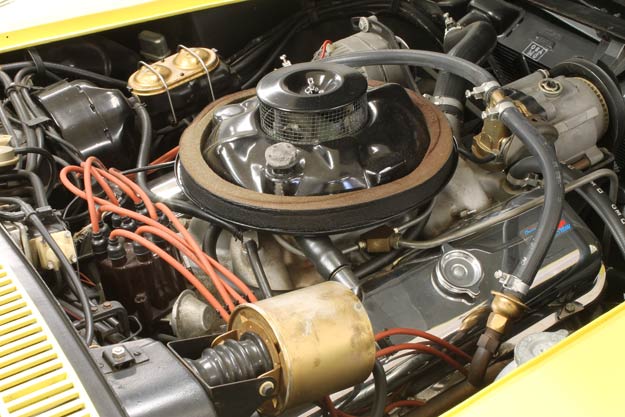 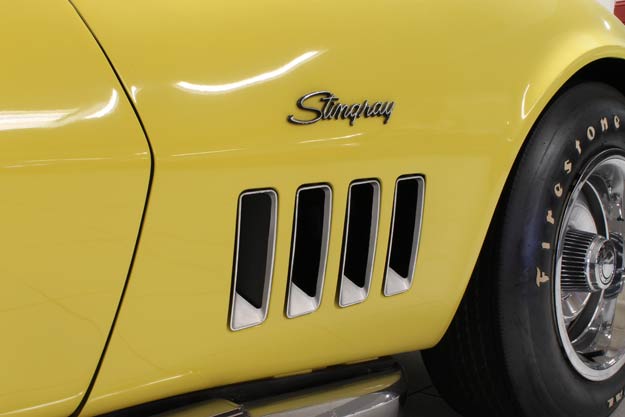 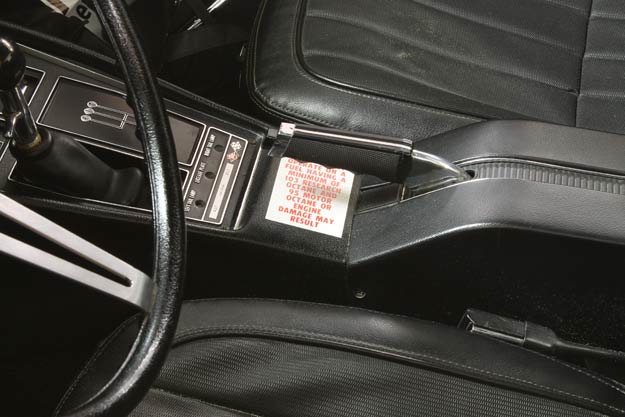 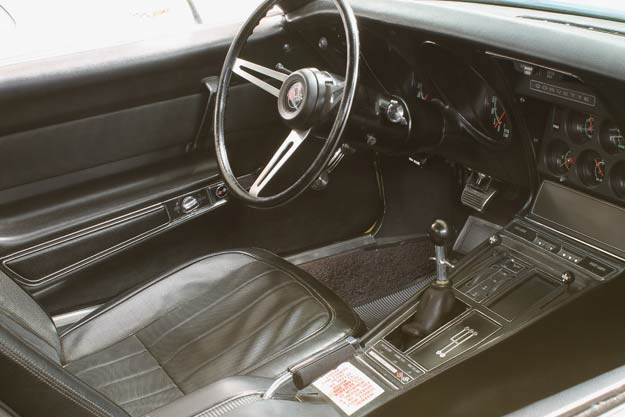 Wayne Walker developed an interest in the car an eventually purchased it from a cabinet maker for $6000. From there, Walker spent several years plugging away at the body off restoration. The biggest challenge in the restoration was finding the right engine for the car. Since the original had disappeared, he didn’t bother to look for it and bought another all-aluminum 427 for $4000 from Yenko Chevrolet in Pittsburgh. One night, a man phoned Wayne and said, “Hey, I’ve got the original engine that came in that car.” It had been through three or four hands before reaching him and someone had painted it red to conceal the aluminum block, but Wayne now had the original engine– for $2200.

The motor was extensively rebuilt, twice, (and blown once more!) before the final body-off restoration was completed by Nabors Motors of Houston, TX. The car ended up winning Gold at Bloomington.

After Wayne Walker’s ownership of the car, it eventually ended up in the hands of the U.S. Marshall’s Office. A gentleman by the name of Roger Judski had been pursuing this car for over 12 years, and this gave him the opportunity he had been looking for. After some feverish bidding, he finally realized his dream and secured the ZL-1– which become the crown jewel of his private collection. The current value of this car runs into the millions of dollars, but Roger and other collectors simply regard it as one of the most important pieces of Corvette history ever.

You can see this extremely rare Corvette on display in the showroom at Roger’s Corvette Center in Orlando, Florida.

The L88s, as Chevrolet produced them, typically generated well over 500 horsepower right off the showroom floor. They could run 13 second quarters at 112 mph on street tires. With proper tires and open headers, they would easily dip into the 11 second range with no modifications to the engine whatsoever.

Shop now for all the parts you’ll ever need for your Corvette!