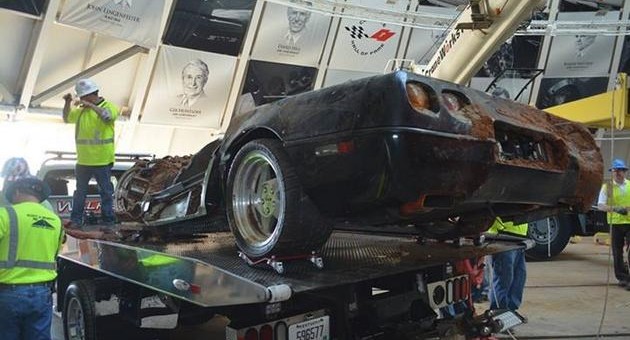 The process of removing the eight Corvettes which were swallowed up by a sinkhole that opened up in the National Corvette Museum in February has been neither easy nor short. The construction crews working on the sinkhole managed to rescue five of the eight Corvettes from the earth’s 30-foot deep embrace before they had to put a temporary halt on the effort in order to stabilize the hole. Today, the rescue attempts started back up with the one-off 1991 Corvette ZR-1 Spyder being hoisted out of the pit and back to safety.

Since the hole first opened it has been a worry of the Corvette Museum that the deeper the cars are in the hole, the worse shape they will be in. Unfortunately, their suspicions were confirmed this morning when they got their first look at the Spyder since it fell into the hole and discovered it was in worse shape than even the now barely-recognizable 1984 Corvette PPG Pacecar.

GM did not produce a convertible version of the C4 ZR-1 but did make a few prototypes which were drop tops. The black example in the National Corvette Museum was originally painted Sebring Silver with a Neutrino Yellow interior and was the exact car on display at the 1991 North American Auto Show. After the show, it was repainted black and the interior color was changed to red. The car has many unique features no other C4 ZR-1 has such as custom billet aluminum wheels, a custom tonneau cover with a waterfall, a chopped windshield, narrowed side mirrors and a louvered hood with the signatures of all those involved in building the car written on the underside. So far, the NCM has been unable to find the hood.

“They have not been able to retrieve the hood. We are still hoping they find it, but that’s one of the big problems. When we displayed the car we wanted everybody to be able to see the signatures so when the car went in the hood was up, and it just snapped the hood off,” said Mike Williams, a member of the Museum’s facility team whose father helped build the car.

The rescue efforts of the ZR-1 Spyder also led to more good news for the museum after they accidentally stumbled upon the 1.5 Millionth Corvette, a white C6 Convertible, while digging to unearth the Spyder.

“When we started digging around the black Spyder, we found a piece of white fiberglass underneath it and we continued to expose that until we saw that it was the 1.5 Millionth car,” said Mike Murphy, CEO of Scott, Murphy and Daniel Construction. “We had no idea where it was, we just happened upon it.”

As expected, the 1.5 Millionth Corvette is in even worse shape than the ZR-1 Spyder. The NCM says both a large boulder and a concrete slab are currently sitting on the car, two objects which will have to be moved prior to the extraction of the car on either Wednesday or Thursday. The construction teams are hoping when the 1.5 Millionth car is lifted from the hole, it will reveal the position of the only car still missing, the 2001 C5 Z06 Mallett Hammer.

“We hope when we move the white car we find the red car (the C5 Z06) that way, because we’ve just not had any luck detecting where it is,” Murphy said. He mentioned they had utilized metal detectors and probing rods in addition to removing layers of dirt while attempting to locate the C5 Z06, but so far, it has been to no avail.

See the Video at: http://gmauthority.com/blog/2014/04/1991-corvette-zr-1-spyder-rescued-from-corvette-museum-sinkhole/#ixzz2xjUUSNLB