You are here: Home / Corvette News / Atlantic and Pacific Design Packages on 2015 Stingray

Chevrolet announced today that it will make the Corvette Atlantic and Pacific concepts from last year’s SEMA show available as special design packages for the 2015 Corvette Stingray.

The two design packages will be available from the launch date of the 2015 Corvette, which is slated to go on sale later this year. Chevrolet says a strong a response from enthusiasts helped influence the decision to put both the Atlantic convertible and Pacific coupe into production.

“One of the design goals for the Corvette Stingray was to provide customers with the flexibility to tailor the car to their personality,” said Kirk Bennion, Corvette exterior design manager. “The Atlantic and Pacific Design Packages were originally designed to showcase how the Stingray could be configured as a luxury sport GT car or as a high-performance motorsport car.” 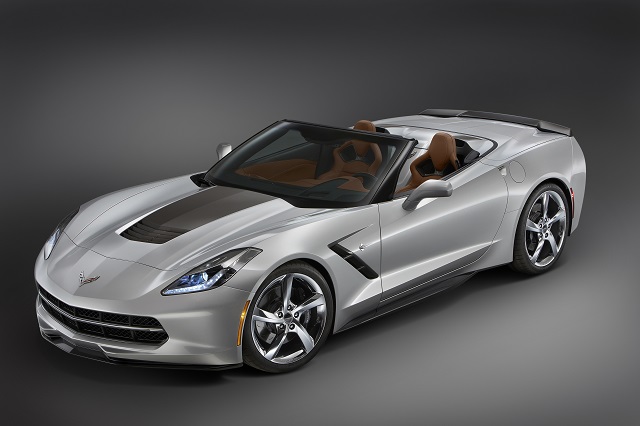 The luxury-focused Atlantic design package is available exclusively on Z51-equipped convertibles in either 2LT or 3LT trim lines. It includes a Z06-style front splitter, ‘Shark Gray’ exterior vents, chrome Torque wheels (like those on the Corvette Stingray Premiere Edition), a Stingray-branded underhood liner and floor mats, a custom license plate frame and valve stem caps and custom luggage. It is available in any color from the Corvette’s color palette, including the new-for-2015 ‘Shark Gray’ shade.

As with other 2015 models, Corvettes equipped with either the Atlantic or Pacific design packages will be available with Chevy’s new Performance Data Recorder, as well as an all-new eight-speed paddle-shift automatic transmission. Like the 2014 model, a seven-speed manual transmission comes as standard.