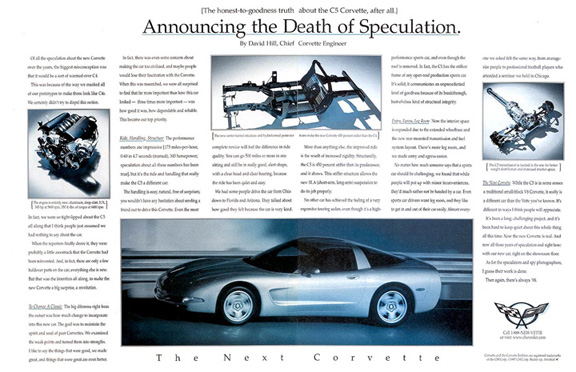 For the C5’s introductory year (1997), Chevrolet was intent on spelling everything out in plain English. This 2 page spread print ad was written by none other than David Hill, the Chief Corvette Engineer at the time. The very wordy ad touts all the new car’s attributes– from its all-new 5.7L aluminum engine (now rated at 345 hp) to its state-of-the-art hydroformed perimeter frame. Easy to see why Chevy executed this ad: they “Changed a Classic”, as they state in the ad’s second paragraph. 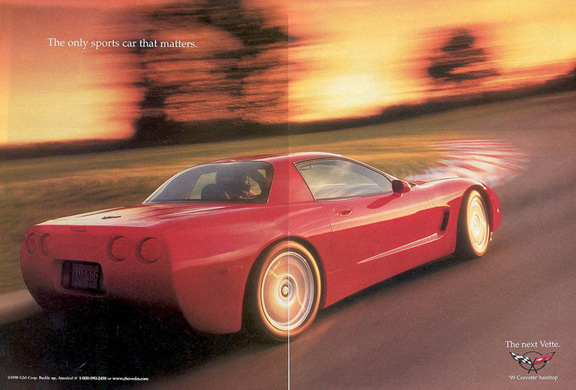 The introduction of the Hardtop Corvette melded nicely with the Coupe and Convertible, flushing out the new line for ’99. This was Corvette’s lowest priced model, and only 4031 were built. 18,078 Coupes and 11,161 Convertibles were produced that year. This print ad goes for bold and simplistic with the heading “The only sports car that matters.” Note the driver wearing a crash helmet. Also noteworthy, in 2001 the Hardtop became the new Z06 model. 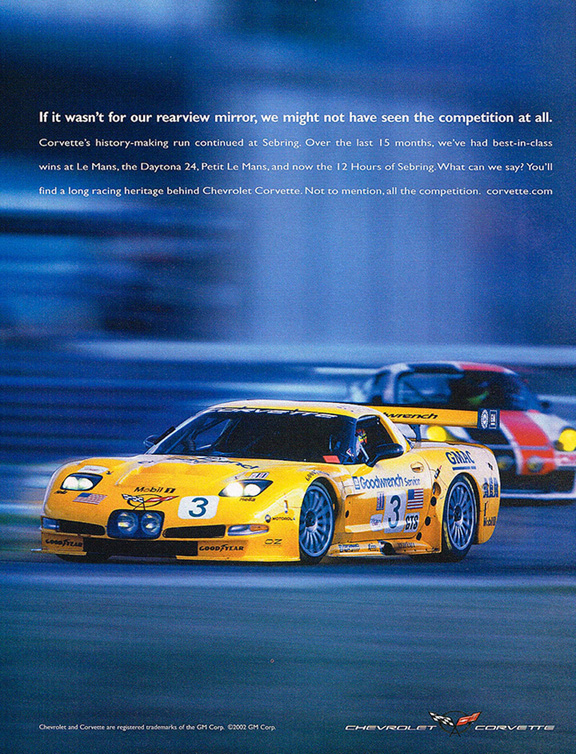 This was Corvette’s hard-hitting ad for 2002. Remember that old adage “Win on Sunday, Sell on Monday.” The dynamic ad copy read: “If it wasn’t for our rearview mirror, we might not have seen the competition at all” Corvette’s history making run continued at Sebring. Over the last 15 months, we’ve had best-in-class wins at Le Mans, the Daytona 24, Petit Le Mans, and now the 12 Hours of Sebring. What can we say? You’ll find a long racing heritage behind Chevrolet Corvette. Not to mention, all the competition. Corvette.com 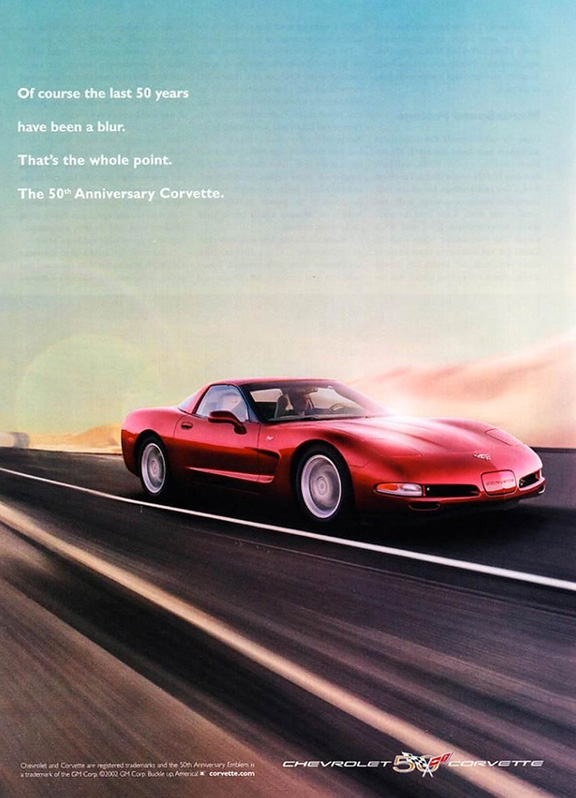 One the most subtle ads for Corvette ever. You could order the special 50th Anniversary package (for the 2003 model year) by requesting the 1SC equipment group– available on Coupes and Convertibles, but not Hardtops. The package included Anniversary Red “Xirallic Crystal” exterior paint, unique front fender emblems, champagne painted aluminum wheels and center caps, and a new Shale interior. These models featured the new F55 Magnetic Selective Ride Control system, which was optional on non-Anniversary Coupes and Convertibles. 4085 Coupes and 7547 Convertibles were ordered with this special Anniversary package.

Text: Of course the last 50 years have been a blur. That’s the whole point. The 50th Anniversary Corvette